How do you say “Merry Christmas” in … German? 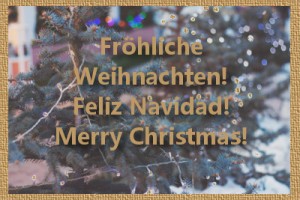 For Christmas, the Federal Association of Interpreters and Translators offers every year a small but nice service. On it’s webpage, Christmas greetings are translated  …

… into more than 80 languages. Alongside such universal languages like English, Spanish or French, the data base also includes Christmas messages in less frequent languages such as Estonian or Javanese.

In English, people would commonly wish each other a: MERRY CHRISTMAS! HAPPY CHRISTMAS! or MERRY X-MAS!

In Spanish, the Christmas greetings that are used most both in Spain and Latin America are: ¡FELIZ NAVIDAD! and ¡FELICES FIESTAS!

To find out Christmas messages for further 80 languages in the world, you may visit the Christmas data base of the BDÜ.